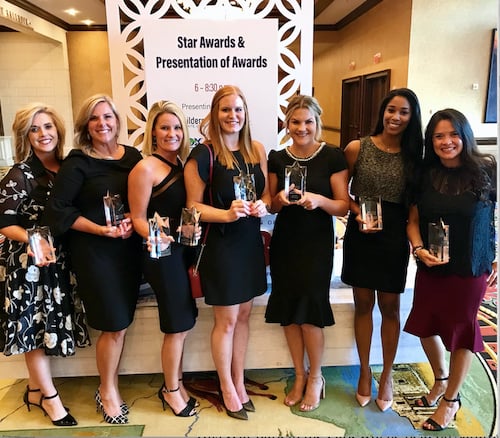 Johnson Development was the most awarded developer in the recent Texas Association of Builder’s Star Awards, walking away with eight trophies.

The annual program — which celebrates the best residential real estate people, products and marketing in Texas — saw a record-setting 575 entries this year.

Five Johnson Development communities won awards during the event, which was held in Grapevine during the annual Sunbelt Builders Show™. Cross Creek Ranch in Fulshear won Community of the Year 200+ acres. With new-home sales up 10 percent this year, Cross Creek Ranch is currently listed as the No. 21 top-selling community in the nation.

“With hundreds of new homesites released this year, new schools, a growing commercial district and a new water park opened last year, Cross Creek Ranch is a prime example of what a master-planned community can be,” said Larry Johnson, Chief Executive Officer of Johnson Development. “We’re very proud of what we’ve done in Fulshear and to be honored among so many respected developments.”

Viridian in Arlington won Best Poolscape for its Lakeview Event and Conference Center, an 8,500-square-foot facility anchored by an infinity-edge pool that appears to flow into Lake Viridian.

Grand Central Park won the award for Best Special Event for its NYC Comes to GCP event, which drew more than 1,000 people into the community for model home tours and Big Apple-inspired activities and refreshments.

In all, Johnson Development communities were named a finalist in 23 categories.

Johnson Development launched in 1975. During its long tenure, the company has won numerous local, state and national awards. It currently has more communities listed among the nation’s top-selling than any other developer. For more information, visit www.johnsondevelopment.com.